2018-19 Preview: Eljay is quick and intelligent guard. He can handle the ball and is a more than capable shooter. He looks to be aggressive when give the opportunity. His quickness allows him to defend a variety of guards both inside and outside. As a senior, he will be looked upon to be a leader both on and off the court. He is great student-athlete and looks to motivate his teammates to be academically successful.

Past Seasons: Eljay is entering his second season on the varsity level. Last season, he appeared in 13 games and started in 1. He gave quality minutes off the bench and was a leader in the locker room.

Personal: Eljay was born on 9/13/00. He is the son of Clara and Lyle Jones. He attended the Business & Economics Academy of Milwaukee (BEAM) for middle school where he played for Coach Washington. His favorite subject at Hamilton is Algebra with Mr. Dang. The Boston Celtics is Eljay’s favorite basketball team and if he could pick any food to eat, it would be fried chicken. 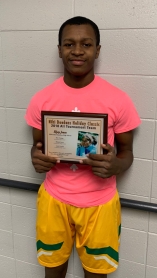